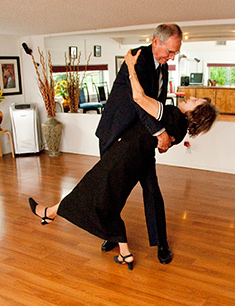 Charles & Hortencia are instructors and the owners of the studio. They have been dancing together for over 30 years. The met at Lavonia Bellah’s Dance Studio in Ft. Worth, where they took lessons for over 20 years from some of the best instructors in the area. They became the best of friends and dance partners during this time. They have now been married for twenty (20) years and still work on perfecting their dance skills.

After marriage, they moved to the family farm at Peaster which is just outside of Weatherford, Texas. From their enjoyment of dancing, they opened the C & H Dance Studio, which was originally called “One Step At a Time Dance Studio”. It started as mainly a fun hobby, but is now one the most popular and rapidly growing dance studios in the area. The studio has been in business nearly ten (10) years.

Charles & Hortencia’s specialties lie in the areas of Ballroom, Swing, Latin, and Country Western. They teach basic steps to very advanced steps in each category.

Charles brings to the studio vast experience in teaching, having retired after 39 years of service to the public schools of Texas. He won numerous prestigious awards during his tenure. Hortencia has also retired from the educational field and from civil service. She brings to the studio a very warm attitude and helps to demonstrate the many dancing patterns they teach. Charles and Hortencia’s main teaching attributes are patience and positive reinforcement.